First and foremost, I developed this part of the page to periodically write interesting articles and observations about the data that I've been collecting. One conclusion I've found is that I find it massively more interesting to gather and promulgate data than it is to write about it. The more relevant consideration is that shortly after adding this feature, I had a daughter, and she's the light of my life. Anyhow, she's now a two-year-old and it's easier to focus on the first conclusion above in my available free time.

And yet, I do love adding data to this database and website - I've been doing it for well over twenty-five years at this point. Here, I wanted to share news about another thing that you might find interesting - I've added backup goaltenders - to the extent known - onto the page.

Are backup goaltenders important? Are backup goaltenders notable? Speaking as someone who backed up a *lot* in college, absolutely yes to both! You're part of the team and you're helping your team to win - even if not on the ice. However, although European professional leagues regularly track Games Played and Games Dressed separately, North American leagues only count your contribution if you appear on the ice.

This is an attempt to start to change that philosophy - I've gone back through the NHL box scores through the start of the 1999-2000 season and manually added the dressed backup in games where they did not appear. I'm also tracking sweater numbers and a few other things that I find interesting. I've also added other goaltenders where I have sufficient evidence that the goaltender dressed - for instance, Greg Millen appearing for the Rangers during Mike Richter's contract holdout to start the 1991-92 season, which you can see here.

What do these look like? Here's a screen shot of the Vancouver Canucks' 2019-2020 NHL season goaltending log, as of this morning:

As you can see, the season begam with Jacob Markstrom starting and Thatcher Demko backing up. Markstrom left on October 14th for a family matter, and Zane McIntyre has been backing up Demko the past two games (Markstrom has returned to the Canucks as of today's game).

The other place to see these are in each goaltender's GAME LOGS. For instance, here is the front end of Louis Domingue's NHL GAME LOGS: 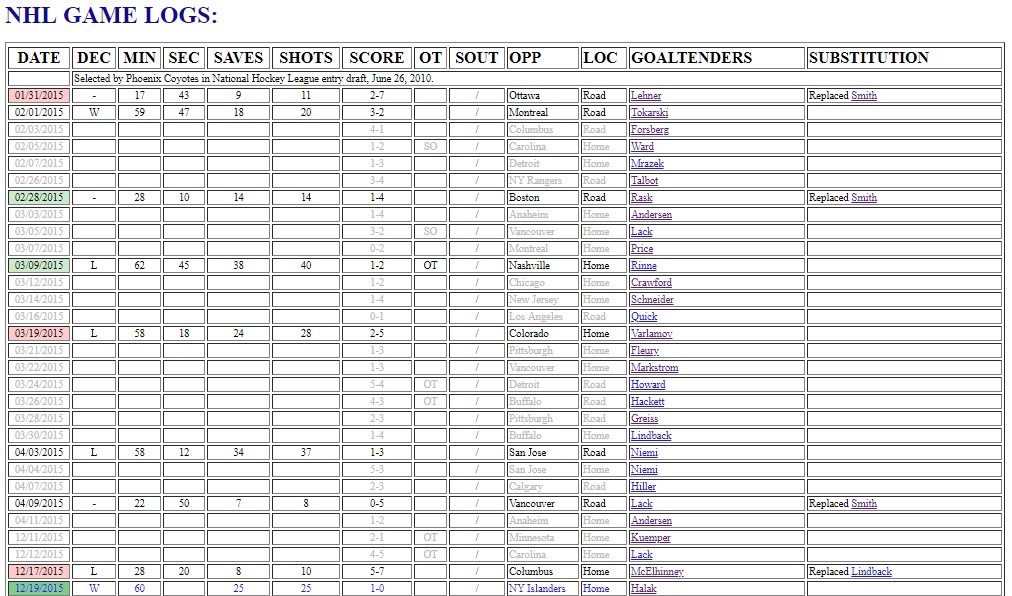 If you've viewed a goaltender's game logs on this site in the past, you'll see that it looks identical to that presentation except that backup games have been added in gray. I tried to choose a color that doesn't distract from the primary game data, but let me know what you think.

Going forward, my intent is to keep this current for all NHL and AHL games, and for all international tournaments that I track. Going backwards, I have the NHL back through 1999-2000 with a few exceptions (where the NHL game summaries have been inexplicably overwritten online), and the AHL back through February 2018 (and adding more manually). How can you help? Right now, I have more sources than I know what to do with - if you're good at scraping AHL game summaries, we need to talk because I'm spending a large amount of time doing this manually (to be perfectly honest, it's relaxing, but there are better things that I could work on). Other than that, send me a note at hockeygoalies@gmail.com or on Twitter at @GoalieHistory. I need good evidence to include someone - please don't just say "Well, I know that John Vanbiesbrouck and Mike Richter backed one another up during this season, so they must have done it here." For instance, I'd bet my own money that Manny Fernandez and Marc Denis were the backups in the Dallas-Colorado Western Conference Finals game on May 25, 2000, but the league overwrote the game summary and I haven't tracked down the proof. Dated photos, or retrospective articles, would be quite useful.

Thank you for reading, and happy hunting!